I envision a world…

where we rap about truth
and sing about hope
to inspire our youth
and help them to cope
instead of delivering messages
that promote
sexism, violence, materialism and dope

I envision a world
where this very class
steps up to the challenge
and meets the tasks
of excellence, humility, charity and planning
that’s ever-evolving and ever-expanding
for these are the traits your future’s demanding
where education and achievement
come second to breathing
and racial solidarity is important as eating
where schools create leaders
rather than fools breeding…
incarceration and death,
suffering and bleeding

I envision a world
where you play a role
where you make the rules
and you get the gold
where you make decisions
that are brilliant and bold
where you fulfill the prophesies
already foretold
So you get to choose
the plot of this story
Will you listen and take heed
or dismiss and ignore me?
The choice is yours….
To the class of 2012, parents, and friends, KAPPA staff, faculty and administration: I greet you with peace and blessings.

I’d like to use as my focus of our discussion, one of my favorite movies: it contains all 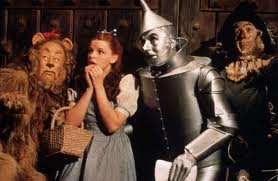 of the features we associate with a great movie: a wonderful story line, interesting characters, great music and dancing, captivating drama, intense action, and gut-busting comedy. I’m sure you’ve all guessed by now that I’m talking about one of the greatest movies of all time, that’s right… “The Wizard of Oz.”

Nearly everyone in this auditorium has seen it, and most of us dismissed it as a silly and sweet movie for children. And how wrong you are! For this movie captures the essence of the problems we face as educators, parents and educators, and the issues you must confront as young people going forth into the world.

The story begins with the main character Dorothy who along with her dog Toto, is swept up into a cyclone and transported to a mystical and distant place. Dorothy has a problem: she is confused, lost, and wants to return home. Dorothy learns that she can solve her problem by following the yellow-brick road and finding the Wonderful Wizard of Oz, an all-powerful being that can grant her wishes. So Dorothy begins her journey.

Shortly afterwards she runs into a scarecrow that like herself has a problem. He explains that he has no brain which of course, is symbolic of intelligence. They continue their journey and along the way run into the tin man who has a problem. He has no heart. But we can’t look at this in a literal sense. Him having no heart symbolizes his lack of humanity, sensitivity and compassion. In today’s language, we would call the tin man a “thug.” They continue along the yellow-brick road and find a fourth character, the lion who has a problem. His problem he explains is that although he is supposed to be the king of the jungle, to have authority and demonstrate leadership, he has no courage, self-esteem, or confidence.

These four troubled characters are unifying, strategizing and actively seeking their liberation and empowerment. They truly believe that they are lacking, deficient, incomplete, and desperately in need of a “Wonderful Wizard” to solve their problems. Unbeknownst to them, a wicked witch from the West is looking at them from a distance through a crystal ball. Today we call such devices satellites and video cameras. Do not forget that this wicked witch is from the West, not the “West Side,” or the “West Coast,” but perhaps the western hemisphere of the world? She is threatened by these characters being empowered and liberating themselves so she seeks to spoil their plans by subjecting them to several obstacles.
The most fascinating obstacle she creates occurs when she uses her magic to send our characters into a poppy field. As children watching the movie we were astonished by the beautiful flowers in this field. We did not know that poppy plants are used to produce heroin and opium, two powerful and dangerous narcotics. Consequently, our characters fall into a deep sleep and their journey is postponed. Does this sound familiar? Do we know of any wicked witches from the west that have deliberately flooded our communities with drugs like heroin, cocaine and crack to put us asleep and take us off track?

After enduring and overcoming several obstacles created by the wicked witch, the four characters eventually reach Oz and meet with the Wonderful Wizard. Initially, the Wizard has them awestruck and intimidated by his amplified voice, smoke, and other effects. They humbly ask the Wizard to solve their problems, to make them whole, to empower them. But just as the Wizard begins to respond, toto the dog, pulls the curtain away and reveals that the all-powerful Wizard is nothing but a stale, pale and frail, white male! Exposed and embarrassed, he explains that he has no actual power to help them. He has used lies, propaganda, and fear to make the citizens of Oz obey and idolize him. Sound familiar?

Dorothy, the lion, the tin man and the scarecrow are offended and highly upset. They spent all of this time and energy overcoming obstacles only to discover that this wizard was powerless to help them. Fearing for his life, the so-called wizard explains that he cannot give them the things they seek for they already have them! Indeed, the scarecrow helped them strategize all along; the lion fought bravely to protect them throughout the entire journey; and the tin man displayed several instances of humanity and compassion. He then gives the scarecrow a diploma to symbolize that he is smart and gives the lion a medal to symbolize his courage. Sound familiar? But what about Dorothy? How will she get home? A good witch named Glenda arrives and brings us to the entire point of the movie….that Dorothy’s problem will be solved if she clicks her heels three times and repeats the phrase “There’s no place like home.”

Now you are all sitting there wondering, “Why is Mr. Tyehimba telling us about this movie?” “What does this have to do with graduating or our future?”

Agyei has been developing this analysis of the Wizard of Oz for over 15 years. You can view a more detailed PowerPoint Presentation about this subject below. Note, you will need internet access and PowerPoint software installed to view video clips embedded within the presentation.