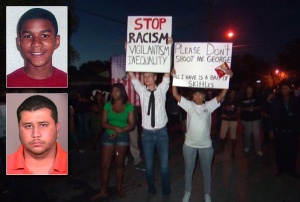 Many of us viewing America’s most controversial and publicized criminal trial at this moment find ourselves torn between feelings of outrage, frustration, and anxiety.

We are OUTRAGED because the corporate media insists on depicting this event as the “Trayvon Martin trial” when in fact, it’s the “George Zimmerman trial” for it is HE who pursued and murdered an innocent teenaged boy and HE who must ultimately be accountable for this deed. We are incensed that yet again, when we face undeserved pain and suffering, whites’ thoughts focus more on formulating plans to quell our anticipated rioting (even going so far as to work with our own leaders in secret to accomplish this), rather than on seeing justice done. We are further outraged that in the same state of Florida where Trayvon was murdered, a Black mother named Marissa Alexander was given a 20-year prison sentence. She fired warning shots into the ceiling of her home to ward off an assault by her abusive husband, who she filed a protective order against, and who beat her while she was pregnant. Her shots did not even strike her husband, let alone kill him. She, like George Zimmerman, attempted to justify her actions using Florida’s “Stand your ground” law, but to no avail. Therefore we are left to believe that this law protects assailants rather than victims.

More recently, Some people (of all nationalities, races, and ethnicities) call themselves doing us a public service by explaining how under Florida law, George Zimmerman had the “right” to use deadly force against Trayvon in self-defense! Here’s my response to that foolishness:

“F**k Florida’s law and interpretation of it which in this instance, seems to protect a murderer, who by the way, made bigoted assumptions about Trayvon Martin without any reason to, and disobeyed orders not to follow him in the first place. If he got his ass kicked for following a young boy in the dark, he deserved it. Oppressors are quick to hide their actions behind law as if laws in and of themselves are infallible. Unjust laws should be protested and exposed, not DEFENDED and explained, point blank. Racially segregated schools and neighborhoods were once law too. As was enslavement, debtor prison, lynching, grandfather clauses, and any number of oppressive and exploitative practices in American history. I find the tendency of some people to “explain” why this murderer should go free reprehensible and disgusting…..That’s my CLEAN response, by the way….”

In addition to outrage, we are FRUSTRATED with what appears to be a forum to discuss George Zimmerman’s right to armed self-defense rather than Travon’s right to live. We wince every time a defense witness answers a yes/no question ambiguously or too broadly. We lose our minds whenever trial commentators suggest that the case hangs on whether

Trayvon assaulted Zimmerman first, the seriousness of Zimmerman’s “injuries” or whether Trayvon or his murderer was “on top” during their struggle. We who are not attorneys cannot understand what in God’s name is so complicated about punishing a self-proclaimed (and obviously bigoted) vigilante who took it upon himself to follow and later kill an innocent and unarmed teenager who posed no initial threat to him. And we who adamantly distrust American “justice” in almost every regard, bristled upon hearing our trusty leaders encourage us to “not rush to judgment,” and instead faithfully “allow the system to do its job.” To his credit, longtime activist Al Sharpton put the Trayvon Martin murder in context and called for an organized response to the tragedy:

Lastly, this trial causes us great ANXIETY because we’ve all been here before and we know how this story typically ends, though we pray for a different outcome this time. Our long and mostly negative experience with America’s racist system of jurisprudence almost compels us to dismiss our leaders’ advice and instead anticipate that George Zimmerman will receive a far-too-light punishment or be exonerated altogether. The 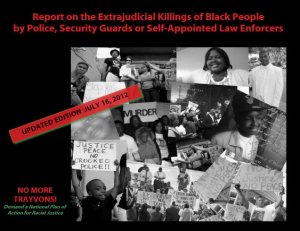 statistics on police brutality (keeping in mind that Zimmerman was not a cop) in the U.S. are well known and they certainly give us no reason for such questionable optimism. The simple fact is that whether we’re talking about 18th Century overseers, racist vigilante groups of the 1860s or 1960s, FBI counterintelligence agents, or police officers, whites and others have either legal or extralegal permission to assault, violate and murder Black people with impunity.

Therefore, we must put this tragedy in a much larger perspective than a murder or trial. Trayvon’s senseless murder was a local act with national meaning and roots far beyond Florida and the Martin family:

I in no way seek to diminish how tragic this incident was/is for the Martin family, yet I truly believe that this incident brings to mind another equally tragic “death.” I refer to the death of righteously indignant, organized, proactive Black outrage and resistance. While white police officers in Sanford, Florida and throughout the country brace themselves for Black riots pending Zimmerman’s exoneration, I’m wondering why such activity isn’t already occurring!

Don’t misunderstand me. I am not advocating that we foolishly and impulsively burn, loot, seek physical retribution or launch into militant acts of disruption and mass protest.

I’m not suggesting that Black people turn this nation upside down and inside out, refusing to comply with any institution or law that oppresses us.

I am not inciting you to take all of your money out of greedy and exploitative corporations and transfer it into businesses (starting with our own) that respect us and the money we spend.

Nor am I trying to persuade you to get in the streets and stop police and other government officials from doing business as usual until our issues are resolved.

Certainly I would not be naïve enough to insist that you patrol and protect your own communities from Black, white or Latino predators; or create everything you need for your survival and sustenance while simultaneously challenging your government to build the quality schools and provide the quality social services your taxes and labor entitle you to.

But after all the countless incidents of anti-Black police brutality, the criminalization of our race, the millions of our brethren unfairly languishing in American prisons,

government-created poverty, attacks on our voting rights, invasions of our privacy, etc. it is curious why Black people in America need to wait for the outcome of this trial to voice outrage and organize for real change. Regardless of whether Zimmerman goes free or does jail time, our sociopolitical condition in this country won’t change. If we haven’t seriously “taken to the streets” by now, the outcome of this trial shouldn’t be the sole or primary reason we do. As sad, upsetting and tragic as Trayvon Martin’s murder was, it was not the proverbial straw that broke the camel’s back. You will agree that every bone in that camel has already been shattered beyond recognition for some time now! Simply put,  this tragic incident and the resulting trial do not constitute the determining factor in our public outrage or strategic organizing. It is yet another log in the fire of our collective will to be free and oppose those forces responsible for our exploitation.

In any event, I will join with many other people of good conscience and protest in the event that Zimmerman walks free. But our protest must be as deep, broad and sustained as our oppressive and exploitative experience was and is in America. It’s time to in the words of Malcolm X, “Wake up, clean up, and stand up!”

Agyei Tyehimba is a former NYC public schoolteacher, co-founder of KAPPA Middle School 215 in the Bronx, NY, and co-author of the Essence Bestselling book, Game Over: The Rise and Transformation of a Harlem Hustler, published in 2007 by Simon & Schuster. Agyei has appeared on C-Span, NY1 News, and most recently on the A&E documentary, “The Mayor of Harlem: Alberto ‘Alpo’ Martinez.” Mr. Tyehimba is a professional consultant and public speaker providing political advice and direction for Black college student organizations, community activist groups, and nonprofit organizations. If you are interested in bringing Agyei to speak or provide consultation for your organization, please contact him at truself143@gmail.com.

6 thoughts on “A Search for Meaning: Trayvon’s Murder and Zimmerman’s Trial”