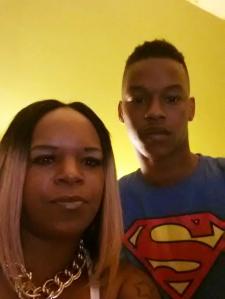 Brother Malcolm warned us that the media will have you “hating your friends, and loving your enemies.” His admonition proved accurate, especially if you viewed the viral video of Baltimore mother Toya Graham slapping her son Michael for throwing rocks at police during the youth rebellion in Baltimore on Monday.

When the controversial video clip aired nationwide, it caused various reactions in the Black community. Some supported her form of hands-on (pardon the pun) discipline. Others castigated her for acting inappropriately on live national television, and embarrassing Black people at an already awkward moment.

Graham has since stated that she disciplined her child to save him from being injured or killed in the rebellion. I believe that any vitriol directed against our sister is MISPLACED. Don’t front. She simply did what many of our parents would have done in a similar situation. Certainly she could have disciplined her child privately, but I’ve seen similar displays in my neighborhood, growing up.

At the same time, praising her as “Mother of the Year,” is a disingenuous attempt of white ultra-conservatives, corporate media, and law enforcement agencies to promote “respectability politics.” They are insinuating that if more Black parents whipped/disciplined their children like Toya Graham did, there would be no violent rebellions in Baltimore. This explains why Baltimore Police Commissioner Anthony Batts could remark, “I wish I had more parents that took charge of their kids out there tonight.”

Rather than spinning this story to his anti-protest convenience, perhaps the police chief should focus on the repeated misconduct of his police officers. In one 4-year period, the Baltimore police department paid a total of $5.7 million in court settlements to 100 people who brought police brutality or misconduct suits.

The point here is that there is no room in a discussion about police brutality for respectability politics. The two issues are not connected. The media and police departments around the country will attempt to endorse this flawed thinking, but Black people must see through this trickery. This is nothing more than victim-blaming mixed with Black criminalization. The logic goes something like this:

It is the opposition’s job to deceive you and make you cooperative, understanding and compliant with its agenda. It is our job to protect ourselves and advance our interests. We have the responsibility and duty to ourselves to recognize anti-Black propaganda, and develop the capacity to challenge and neutralize it. Respectability politics is nothing but propaganda designed to make Black people self-blaming, docile and compliant in the face of victimization by city military forces (police).

Unfortunately far too many of us buy into the respectability politics ruse. Some of us actually believe that “proper” speech, clothing, and so on, will take us off the police radar. Watch this video clip of one Black attorney who teaches his sons how to dress and act to avoid negative interactions with police or white people. This same man later wrote an article in the Washington Post saying that his original notion of respectability politics was wrong!

The fact of the matter is that police brutality is a coercive and proactive element of white supremacy, and Black criminality itself is the direct offspring of white supremacy (Read Amos Wilson’s book Black-On-Black Violence: The Psychodynamics of Black Self-Annihilation in Service of White Domination) .

Whether Black parents beat their children like drums, or are overly lenient with them, police brutality would still exist. If Black people do well in school, dress professionally, speak politely, or refuse to sell drugs or commit crime, police brutality would still exist. How do we know this? Because non-criminal, educated, employed and non-threatening Black folk are routinely assaulted and harassed by police officers!

Sister Toya Graham ( who white America doesn’t give a damn about) is simply the latest person being used by our opposition to have us cooperate with their agenda and accept our “rightful place” as victims. This society repeatedly lampoons Black parents for being abusive in administering discipline to our children. Just about every white comedian has a comedy skit explaining the disciplinary differences between Black and white parents.

White America bitterly criticized NFL running back Adrian Peterson for beating his child, because this fit into the stereotype of the (criminal) Black male brute who couldn’t separate the violence of his gladiator sport from his home life. Those same critics cheered and applauded Toya Graham for repeatedly slapping her son in the face on national television. Why? Because this soothed their indignation against Black youth rebels who began burning, looting, and “attacking” police. The simple act of a single mom chastising her child became in white minds, a subliminal attack against all of those “savage young rebels in Baltimore.” In their insulated and smug minds, they believed that if more Black parents disciplined their children, not only would they not be throwing rocks in the street, but they would also not be killed by police in the first place! In other words, Black people (either criminal, deviant, or poorly trained) are to blame for being gunned down by police officers!

Don’t believe the hype, Black people. Read between the lines, and think for yourselves. And whatever you do, don’t allow the media, Baltimore mayor, police chief, U.S. president on anyone else, divert your attention from the issue at hand: Police across this country are attacking and killing unarmed Black people in epidemic numbers, and police departments, policing methods, and the mentality of police officers must change!

Agyei Tyehimba is an educator, activist and author from Harlem, N.Y. Agyei is a former NYC public schoolteacher, co-founder of KAPPA Middle School 215 in the Bronx, NY, and co-author of the Essence Bestselling book, Game Over: The Rise and Transformation of a Harlem Hustler, published in 2007 by Simon & Schuster. In 2013, he wrote The Blueprint: A BSU Handbook, teaching Black student activists how to organize and protest. In April of 2014, he released Truth for our Youth: A Self-Empowerment Book for Teens. Agyei has appeared on C-Span, NY1 News, and most recently on the A&E documentary, “The Mayor of Harlem: Alberto ‘Alpo’ Martinez.”

If you are interested in bringing Agyei to speak or provide consultation for your organization, please contact him at truself143@gmail.com.

One thought on “Respectability Politics: How the Media Used Toya Graham”