Not long ago, I wrote an article in support of Umar Johnson’s mission to create an academy for boys, followed by a June 19th open letter asking him to respond to legitimate community questions.

I knew that Dr. Umar’s response would be revealing. If he chose not to respond, it would display his disregard for the Black community he presumes to lead; If he responded by respectfully answering the questions posed, he would reveal himself as a sincere man of the people with a humble spirit and nothing to hide.

Umar, I thought, could also take a third approach and respond with bitterness, accusation, and bravado, without adequately addressing the questions raised to him. Umar chose the third approach. Johnson posted the following indirectly direct response on his Facebook page:

“I’ve been made aware of all the hate that has been directed towards me via social media during the past 48 hours, but please keep in mind that it is nothing compared to all the love that I receive. The hate filled articles, youtube cameos, so-called open letters, interviews, & upcoming events that seek to approximate, directly or indirectly, either the drama, my political platform, or both, have done nothing to derail me from my goals. When shit gets spilled the maggots cannot help but to play in it, so let’s let them have their 5 minutes of fame. My attorney has been apprised of the situation and paperwork for the major players in the “Umar Must Go” campaign will be served accordingly. On the other hand, I’ve been receiving nothing but positive letters of support from around the world. FDMG fundraiser donations have seen an increase, and requests to travel the world to address the plight of our people has skyrocketed as of late. In a very ironic manner, these recent attacks have served to strengthen the support for Dr.Umar & FDMG, not weaken it. As for these opportunistic haters in the conscious community, less fortunate “scholars” and con-artists, I see everything, and when the smoke clears your asses will be as irrelevant as before. Throwing rocks at the throne is a waste of time; if you want the crown you gotta come and take it…..”

His response was accusatory, bitter, arrogant, and most importantly, did not address any of the legitimate questions posed (in my open letter). In response, I wrote the following on Facebook:

My two blog articles regarding brother Umar Johnson and his mission to educate our youth have attracted thousands of views and mixed responses from others including one from Umar himself (though not directed specifically to me). This is my response to those who’ve turned an opportunity for mature dialogue into an opportunity to be ugly, competitive and accusatory:

“I wrote this open letter and a previous article regarding brother Umar’s mission to educate our youth. I believe both writings are self-explanatory, but some have attempted to misrepresent my words. I am not accountable for others’ comments. My own words speak for me. I don’t know how anyone could read those articles and suggest that I’m a sellout, or that I’m “hating” on Umar. If the Conscious Community cannot tolerate legitimate critique and cannot recognize when they/we are wrong or inappropriate, then we must reconsider if we have a viable Conscious Community at all. Only cult leaders, their followers, or narcissists behave or think in this manner.”

Curiously, Umar Johnson answered none of the questions raised, but instead referred to those questioning him as “maggots,” and “opportunistic haters;”  He refused to explain or apologize for his demeaning and insulting behavior; He even promised  legal action against some of his critics; Lastly, he insinuated that he was the “king” (of what  exactly will have to be determined) and tauntingly suggested that “throwing rocks” (criticizing his words and leadership) was not sufficient; If we want the “throne” (that he possesses or occupies) we must “come and take it.”

It appears that Umar Johnson and many of his supporters/followers have an over-inflated sense of importance and do not appreciate critique, even in its legitimate forms. He characterizes ALL critics or detractors (whether their critiques/questions are valid or not) as “agents,” “maggots,” and “haters.” Yet any of us who are community activists, intellectuals, organizers, students, workers, athletes or business owners know that as brother Malcolm stated, “If you have no critics, you’ll likely have no success.”

I write this article to argue for our right to be critical or question anything and anyone. Contrary to what others may say or believe, being critical is our right and responsibility. This especially applies  to prominent individuals who come to us asking for large sums of money, and who promote themselves as leaders and reincarnated leaders.

All we need do is read Chester Himes’ 1965 novel, “Cotton Comes to Harlem” (later

done as a movie) to understand our need to be critically supportive of Black leaders/spokespersons or their empowerment initiatives.

In this book/movie, a con man disguised as “Reverend Deke O’Malley,” masterfully uses Black Nationalist rhetoric and bogus references to Marcus Garvey to scam Black Harlemites into paying him $100 each for shares to purchase a ship called “Black Beauty.” This ship, according to the con artist preacher, will take them back to Africa. Eventually O’Malley seduces $87,000 from the Harlem community and they eventually realize his fraudulent intentions…too late.

In a capitalist framework, nearly everything and everyone gets reduced to an object of value, or labor to develop wealth, while material wealth and those with it become false gods. Add to this false consciousness, an oppressed people desperate for relief from poverty, despair, and exploitation, and compromised leadership in addition to a socially inflicted sense of nobodiness.

When we witness a Black man or woman who seems to embody elements of courage, intelligence and vision, one who unapologetically articulates our pain and desires, and who inspires us to think big and be self-sufficient, we  want to support them. This is fine, but our support must be critical. I argue that valid criticism or critique are both preventative and corrective.

This oppressive and devaluing sociopolitical environment makes Black people prime targets for being misled, hoodwinked, and bamboozled. This helps to explain why our people have long been victimized by scams, half-baked ideas, poorly organized initiatives, false prophets and “righteous hustlers” in white and Black skins, peddling all manners of magic elixirs to line their pockets under the guise of “solving our problems” or liberating us.

Given these realities, we employ legitimate and principled criticism in a preventative manner: It helps us to identify and guard against

Criticism is not simply reserved for shady characters or ventures. There are times when sincere people with authentic motivations make errors in judgement or handle a situation inappropriately.

Corrective critique helps us to improve or enhance our plans or ideas and make us more effective. Empowered people strive for excellence. Legitimate corrective critique empowers us to develop more accurate analysis, more effective strategies, and more relevant or useful objectives. We can learn and grow even from the opinions of foes or outsiders. But we have a special mandate to welcome and respond to valid critique from those we serve, who we ask to support us, and who make it possible for us to earn a living.

Perhaps being uncomfortable with criticism is somehow coded into our DNA. We like to feel confident and secure. Outside criticism might make call our skills or ideas into question. We might worry that people will question our competence or knowledge. It’s fair to say that we all can remember times when we didn’t handle criticism well.

However, it’s also fair to say that we harm ourselves when we shun legitimate critique. We can also concede that a well-meaning individual with nothing to hide, does not attempt to silence valid critics with legal or physical threats, or immature name-calling.

As I mentioned in my Facebook post, “If the Conscious Community cannot tolerate legitimate critique and cannot recognize when they/we are wrong or inappropriate, then we must reconsider if we have a viable Conscious Community at all. Only cult leaders, their followers, or narcissists behave or think in this manner.” 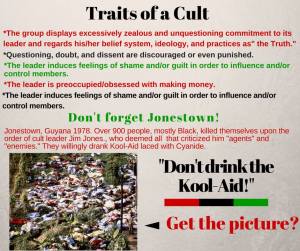 At this point, I think it’s premature to characterize Dr.Umar as a cult leader or a narcissist. However, some of his actions and words are leading many to view him as such and to question his intentions. As more people come to this conclusion, his fundraising drives, career goals and personal credibility as a Pan-African Nationalist man and leader will likely suffer greatly.

Fortunately, Dr. Johnson can avoid that fate. He might find it fitting to apologize for his arrogant, insensitive and evasive Facebook response. He can also demonstrate great maturity, integrity and respect by respectfully answering the questions posed to him from members of the Black community he works to educate and empower:

Question 1: Do you have a transparent system of financial records or accounting that allows supporters to know exactly how much money you’ve accumulated without having to depend simply on what you say? 1a.How much as of this date have you raised via check, cash and Gofundme, and how much additional money do you need? 1b. Why did you cut the sister off from her legitimate line of questioning and refer to her in such a derogatory manner? 1c. If for any reason, you are unable to secure the properties you mentioned, how will you use all the monies you’ve accumulated in your fundraising campaigns?

Question 2: Can you respond to the above criticisms/observations of your words/behavior in this clip? 2a. Is there anything for which you’d like to apologize?

Question 3: Do you have a video clip or document that explains a comprehensive and strategic plan regarding the academy? 3a. If so, can you provide that link or document? 3b. Creating a school requires a collaborative team effort. No one individual can effectively raise money, plan curriculum, coordinate hiring, educational materials/supplies and other concerns alone. Do you have such a team or board in place? If so, who is on this board and what are their qualifications?

Agyei Tyehimba is an educator, activist and author from Harlem, N.Y. Agyei is a former NYC public schoolteacher, co-founder of KAPPA Middle School 215 in the Bronx, NY, and co-author of the Essence Bestselling book, Game Over: The Rise and Transformation of a Harlem Hustler, published in 2007 by Simon & Schuster. In 2013, he wrote The Blueprint: A BSU Handbook, teaching Black student activists how to organize and protest. In April of 2014, he released Truth for our Youth: A Self-Empowerment Book for Teens. Agyei has appeared on C-Span, NY1 News, and most recently on the A&E documentary, “The Mayor of Harlem: Alberto ‘Alpo’ Martinez.”

If you are interested in bringing Agyei to speak or provide consultation for your organization, please contact him at truself143@gmail.com.

10 thoughts on “We Have a Right and Responsibility to Critique Dr. Umar Johnson”